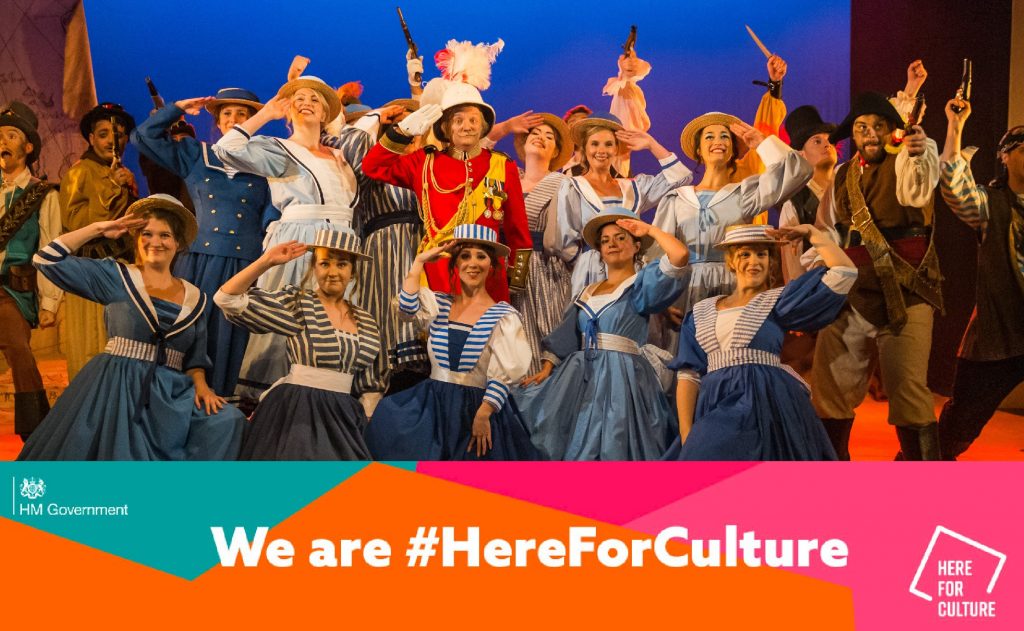 The International Gilbert & Sullivan Festival is delighted to have been awarded a grant of £120,000 as part of the Government’s £1.57 billion Culture Recovery Fund (CRF) to help face the challenges of the coronavirus pandemic and to ensure they have a sustainable future.

The Festival is one of 588 cultural and creative organisations across the country receiving urgently needed support – with £76 million of investment announced. This follows £257 million awarded last week to 1,385 organisations, also from the Culture Recovery Fund grants programme being administered by Arts Council England on behalf of the Department for Digital, Culture, Media and Sport. Further rounds of funding in the cultural and heritage sector are due to be announced over the coming weeks.

The Festival was founded in 1994 and is staged annually in Buxton Opera House and the Royal Hall Harrogate every August attracting thousands of visitors from around the world and all corners of the United Kingdom.

Gilbert & Sullivan remain the world’s most performed theatrical partnership and paved the way for musical theatre as we know it today.

The Festival has been in the forefront of promoting the works of Gilbert & Sullivan through first-class amateur and professional performances from opera companies drawn from across the UK and abroad, youth productions, a unique competitive festival for University societies, workshops and numerous fringe events.

This much-needed support ensures the future of the Festival during the challenging months ahead.

“This is more vital funding to protect cultural gems across the country, save jobs and prepare the arts to bounce back. Through Arts Council England we are delivering the biggest ever investment in the arts in record time. Hundreds of millions of pounds are already making their way to thousands of organisations.

“These awards build on our commitment to be here for culture in every part of the country.”

“Culture is an essential part of life across the country, helping to support people’s wellbeing through creativity and self-expression, bringing communities together, and fuelling our world class creative industries.

“This latest set of awards from the Culture Recovery Fund builds on those announced recently and will help hundreds of organisations to survive the next few months, ensuring that the cultural sector can bounce back after the crisis.  We will continue doing everything we can to support artists and cultural and creative organisations, with further funding to be announced in the coming weeks.”

Festival Director, Janet Smith, said “The grant is a lifeline for our fantastic Festival to continue in the future and we are now confident that we can deliver an outstanding event for our visitors to enjoy in 2021.  We employ over a hundred opera singers, orchestra players and creatives throughout the year and we know they will also be delighted to hear this wonderful news”.

Arts Council England is the national development agency for creativity and culture. We have set out our strategic vision in Let’s Create that by 2030 we want England to be a country in which the creativity of each of us is valued and given the chance to flourish and where everyone of us has access to a remarkable range of high quality cultural experiences. We invest public money from Government and The National Lottery to help support the sector and to deliver this vision. www.artscouncil.org.uk

Following the Covid-19 crisis, the Arts Council developed a £160 million Emergency Response Package, with nearly 90% coming from the National Lottery, for organisations and individuals needing support. We are also one of several bodies administering the Government’s Culture Recovery Fund and unprecedented support package of £1.57 billion for the culture and heritage sector. Find out more at www.artscouncil.org.uk/covid19

About the International Gilbert & Sullivan Festival

The first International Gilbert & Sullivan Festival took place in 1994.   It is now staged in Buxton Opera House and the Royal Hall Harrogate every August and attracts thousands of visitors from around the world and all corners of the United Kingdom.

The National Gilbert & Sullivan Opera Company is the Festival’s own professional opera company. It performs in Buxton Opera House, The Royal Hall Harrogate and goes on tour around the UK until Autumn.

Gilbert & Sullivan remain the world’s most performed theatrical partnership.  Together they wrote fourteen comic operas between 1871 and 1896.  W S Gilbert, who wrote the words, created fanciful topsy-turvy worlds for the operas.  For nearly 150 years, lines and quotations from Gilbert’s witty pen have become a part of the English language, such as “short, sharp shock”, it’s love that makes the world go round!” and “let the punishment fit the crime”.   Sullivan’s genius for melody and Gilbert’s magic with words produced a combination of music and text that has rarely equalled.

Gilbert & Sullivan paved the way for musical theatre as we know it and their influence is present in just about every modern musical.  Although it is easy to concentrate on Gilbert’s genius as a writer, his work as the first stage director must not be underestimated.  Gilbert realised just how vital stage management was, and his attention to detail was a new development for the future of the theatre.

Producer Richard D’Oyly Carte brought Gilbert & Sullivan together and nurtured their collaboration.  He built the Savoy Theatre in 1881 to present their joint works which came to be known as the Savoy Operas, and he founded the D’Oyly Carte Opera Company, which performed and promoted their operas for over a century.

Henry Wood, writing in 1921 observed “We have two masters who are playing a concerto.  Neither is subordinate to the other; each gives what is original, but the two, while neither predominates, are in perfect correspondence.  This rare harmony of words and music is what makes these operas entirely unique.”