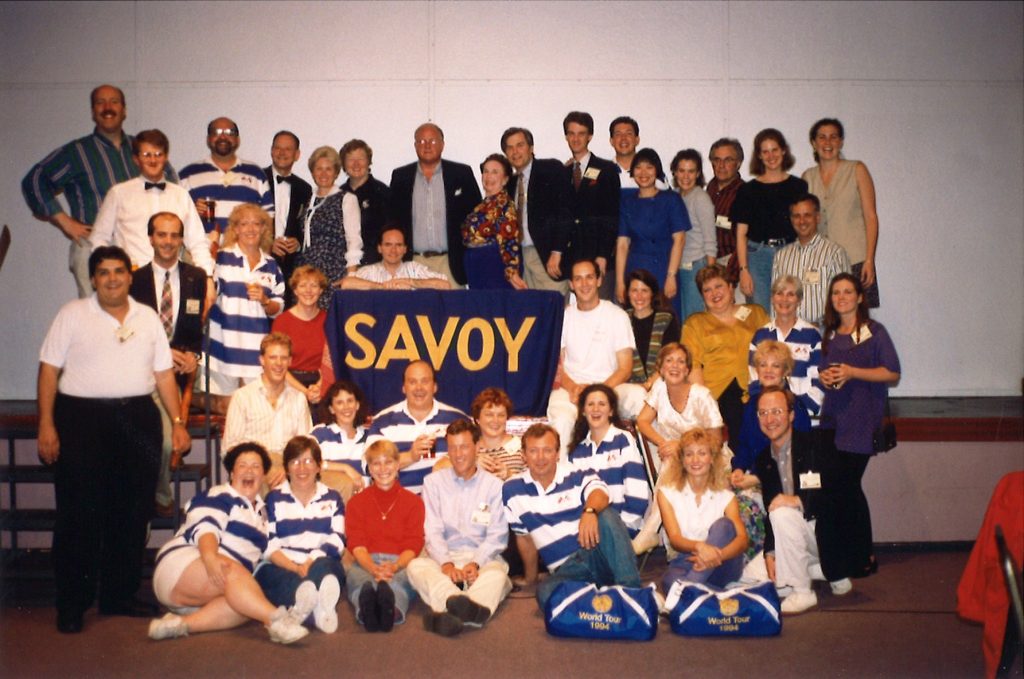 The Savoy Company performed at the very first Festival in Buxton in 1994.  Belinda Smith (Festival Chairman, Ian’s daughter) was working for the Festival at the time and welcomed the group and their President Tom Tyler to town…. A couple of years later Belinda and Tom were married and have lived at truly Gilbertian ‘happily ever after’ in Philadelphia with their three children Harriet, Henry and Lucy ever since.

And now 25 years on… The Savoy Company of Philadelphia returns to The International Gilbert & Sullivan Festival to perform a very special production of Iolanthe in the Royal Hall on Monday 13th August.

Belinda and Tom told us about the Company and about that very first, terrifying performance in Buxton in 1994….. 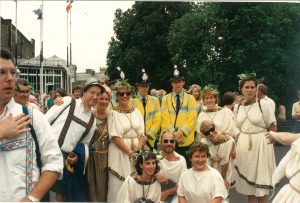 In 1901, a young Philadelphia doctor named Alfred Reginald Allen, having witnessed Gilbert & Sullivan works performed in England, recruited a group of locals to perform their works in Philadelphia in what he deemed a “proper” manner.  The group’s performance of Trial by Jury was such a hit that The Savoy Company was born.  In short order it reached a level of acclaim that even garnered a personal letter of appreciation from Sir Gilbert himself! 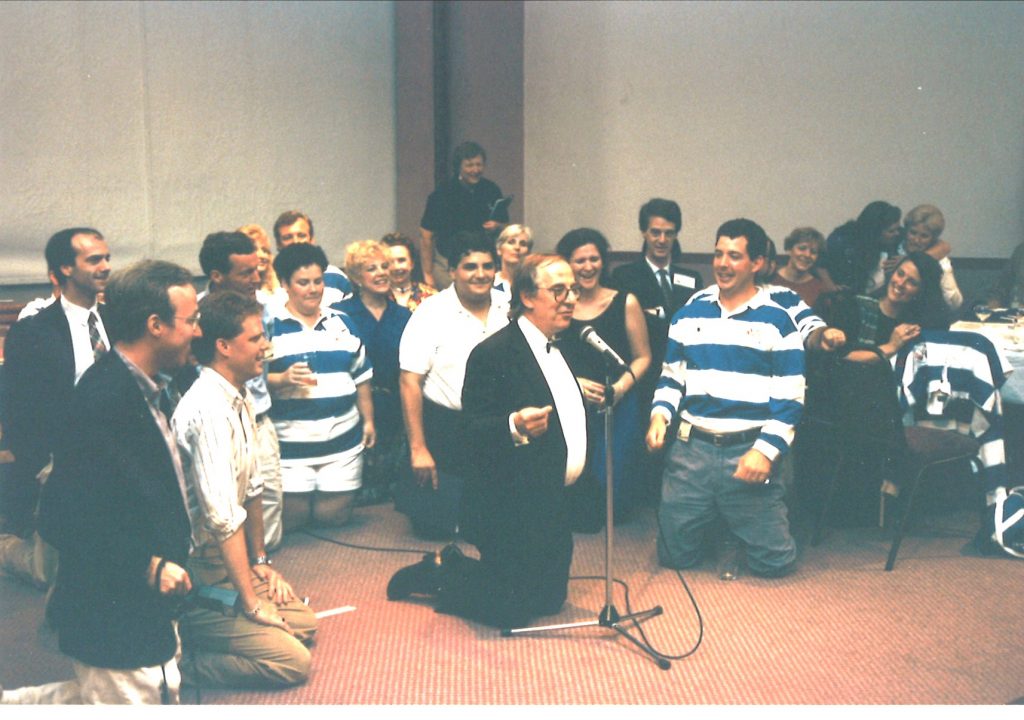 Now in its 118th season, The Savoy Company bills itself as the oldest company in the world dedicated solely to the production of G&S.  That claim may impress Yankee audiences, but we know it represents a daunting challenge when Savoy takes its act across the pond!  In the fall of 1993 a videotape arrived at our mailbox that presented Ian Smith & John Reed, seated in the Buxton Opera House, inviting us to the First International Gilbert & Sullivan Festival. “Why, of course we have to go! We’ll have to show them how it’s done!”  (Well, being American, hubris sometimes is hard to overcome.)  So, off we went with our production of … The Grand Duke.  Yes, risk takers were we.

After our arrival in Buxton, we went to see South Anglia Players perform Pirates.  It was our first chance to see the competition, and we were, in a word, humbled.  Savoy learned just what an adjudicated festival involves.  David Turner, the eminent actor, director, and adjudicator, began to meticulously take the show apart.  He commented on the set, the props, the staging, the costumes, the chorus movements.  It was illuminating.  It was inspiring.  It was terrifying.  We headed straight for the bar.  The theatre’s doors very nearly had to be blocked to keep some Savoyards from fleeing back to the nearest airport!  Instead, the Company worked with the orchestra, danced, drilled, drilled, and drilled some more.  Our performance was the very next night.

After it concluded, Mr. Turner emerged from behind the curtain.  “I read this opera three times today and couldn’t make sense of it,” he began, as we collectively held our breath.  “It speaks fine for this performance that it all became clear.”  “This group of players is to be congratulated on its courage on mounting the production at all, but doubled congratulations in presenting it in such a way that it made for a very enjoyable evenings entertainment.”  We were hooked!

On August 13, 2018, Savoy will be honoured to return for the 25th Anniversary of the International Gilbert & Sullivan Festival with its production of Iolanthe.  Peter Hilliard returns for his sixth season as music director, and Bill Kiesling, in his fourth season as stage director, draws from the Lord Chancellor’s assumption that he’s encountering some characters from “Andersen’s Library,” and adds his signature subtle twist by envisioning Iolanthe as a fairy tale. Take note of his homage to several Hans Christian Andersen fairy tales intertwined with this classic G&S tale! 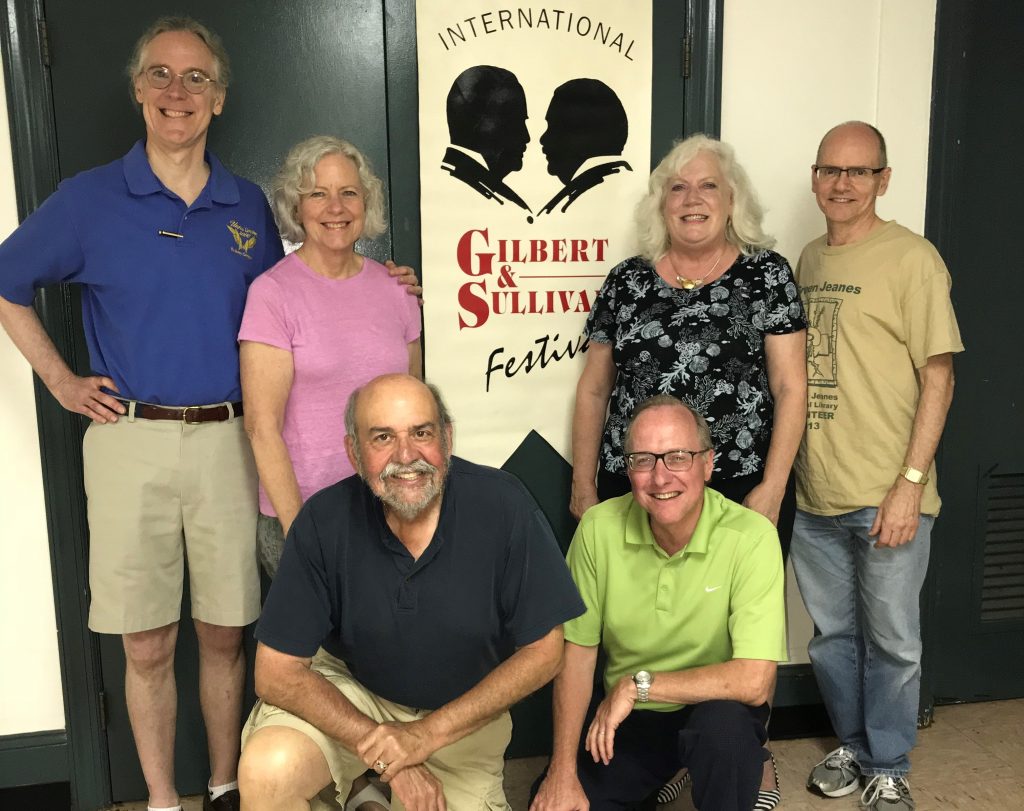 Hardly looking a day older, we are thrilled that six performers from our 1994 production of The Grand Duke will be joining us in Harrogate this year. Pictured are Kelly Crumlish, Portia Bosch, Guillermo Bosch, Tom Tyler, Shelley McMackin and Ross Druker.

We hope you’ll join us for our return romp, and help us celebrate not just the Festival’s wonderful 25th Anniversary, but the same anniversary of our own first visit to this most enchanting celebration of everyone’s Favourite Duo!

Thank you Smiths! Note a typo in your intro, where you write “The Savoy Company of Philadelphia returns to The International Gilbert & Sullivan Festival to perform a very special production of Iolanthe in the Royal Hall on Monday 11th August.” That should be the 13th August!

How exciting for all my Savoy friends and family!! Best wishes for a wonderful trip and production!! I will be thinking of all of you on the 13th of August. Safe travels and warmest regards Marie Maguire’07

What a wonderful history of Savoy’s first involvement in the festival. We wish you the same resounding success as in days of yore. Would just love to be “up there” with all of you, but maybe next time. Best wishes to everyone from…..
Fred and Lura Wampler